Many who are acquainted with church life would call ‘revival’  a series of meetings designed to draw unbelievers into the church.

But revival in the classic sense is much more. It’s the awakening – the reviving – of spiritually lukewarm Christians leading to a glorious, enthusiastic church that attracts a weary world to Christ.

True revival is what most preachers long for. So the lack of revival causes many pastors to grow weary. To wonder if they’re doing any good. To, in many cases, give up on their profession. 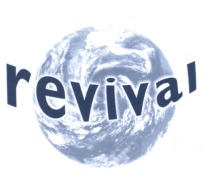 When churches rock along year after year in a deadening apathy, it crushes the spirit. One of the pastoral dangers of revival’s absence is that preachers often give up and sink to the level of the apathetic, rather than pulling the lukewarm up to a higher spiritual temperature. Having sunk to that level, many pastors never recover. They become the caricature of a ‘professional’ – working only to survive till retirement. They’re more interested in keeping the peace than in trying one more time to stir a heated revival.

So, how can pastors – and churches – see true revival? What prevents it? What causes it?

Most students of the phenomenon believe that true revival is a sovereign work of God. And that the only way to see that sovereign work is by prayer – by asking God to send His Spirit to revive His church. Note some of these quotes generated by the great revivals of the past:

The Great Awakening: “The faith and prayers of the righteous leaders was the foundation of the Great Awakening. Before a meeting, George Whitefield would spend hours–and sometimes all night–bathing an event in prayers. Fervent church members kept the fires of revival going through their genuine petitions for God’s intervention in the lives of their communities.” –Amy Puetz (www.christianity.com/church/church-history/the-great-awakening-11529421.html)

The Second Great Awakening:  “In New England, there was a man of prayer named Isaac Backus, a Baptist pastor, who in 1794, when conditions were at their worst, addressed an urgent plea for prayer for revival to pastors of every Christian denomination in the United States. Churches knew that their backs were to the wall. All the churches adopted the plan until America, like Britain was interlaced with a network of prayer meetings, which set aside the first Monday of each month to pray. It was not long before revival came.” -J. Edwin Orr (www.churchplantingwiki.com/index.php/wiki/Prayer_-_J_Edwin_Orr_-_The_Role_of_Prayer_in_Spiritual_Awakening/)

The Third Great Awakening: “As the historian Timothy Smith showed in his book Revivalism and Social Reform, there was an earnest expectation of awakening, and much prayer in many places for it in 1857. In cities large and small there were interdenominational prayer meetings. One prayer meeting, held daily at 4 p.m. in Bethel, Connecticut, was attended by ‘farmers, mechanics, and storekeepers,’ and claimed 400 conversions. Many smaller towns had similar daily or weekly prayer sessions… In Chicago, the Metropolitan Theater was filled every day with 2,000 people. In Louisville, Kentucky, several thousand crowded each morning into the Masonic Temple, and overflow meetings were held around the city. In Cleveland, the attendance was about 2,000 each day, and in St. Louis all the churches were filled for months on end… In February 1858 James Gordon Bennett began to give extensive space to the awakening in his paper, the New York Herald. Not to be outdone, Horace Greeley, editor of the New York Tribune, gave still greater coverage to the meetings, until in April 1858 he devoted an entire edition of the Tribune to a special revival issue.Other papers quickly followed suit in reporting the great numbers of people all throughout the nation attending the prayer gatherings and professing faith in Christ.”
(http://www.christianitytoday.com/ch/1989/issue23/2332.html?start=2)

It’s clear from these quotes – and hundreds of others – that, since only God can truly revive His people,  prayer will bring spiritual revival.

“And do this, understanding the present time: The hour has already come for you to wake up from your slumber, because our salvation is nearer now than when we first believed.” -Romans 13:11 NIV

What an inspiring morning! Our local National Day of Prayer Breakfast today, sponsored here in our region by Community Prayer Partners, hit a new high watermark. The food was wonderful – but the spiritual uplift came fro 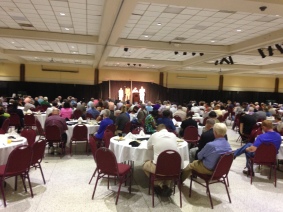 m our worship time… and from the prayers of nine people chosen from different denominations to pray aloud about our families, churches & government… and from an excellent Bible message from Duck Dynasty’s Willie Robertson. Willie challenged us not to be identified by our past sins, but by our position in Christ. And to keep praying together as a community. A community that he and his family love and serve.

It seems we had around 400 hundred who attended, yet the impact didn’t come from the number but the spirit of the event. Or should I say Spirit?

It certainly helps to have well-known speakers like Willie Robertson but, judging from the Spirit of the room this morning, God’s Presence shaped the whole event. His Spirit encouraged us to keep on praying. And keep on loving each other in unity.

I’m already looking forward to next year. Hope you’ll plan to be there, too!

And keep on praying for spiritual revival in this broken world!